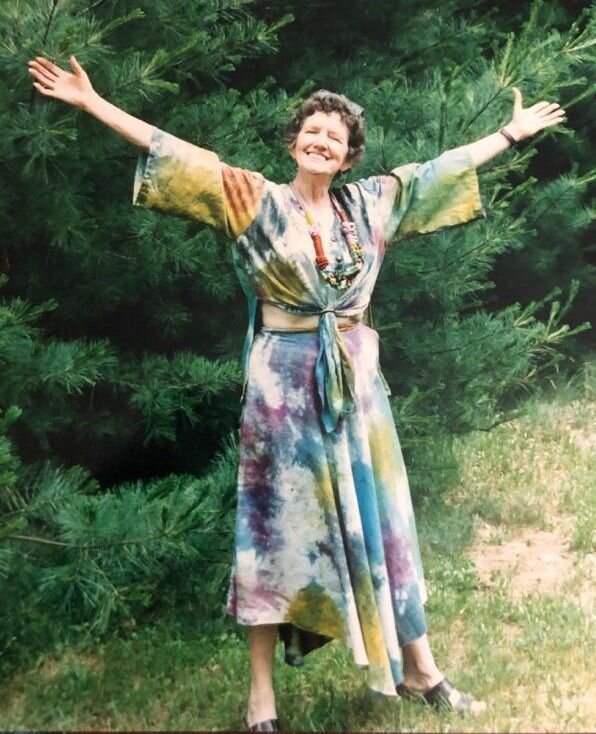 Please share a memory of Constance to include in a keepsake book for family and friends.
View Tribute Book

Constance (“Connie”) Canney passed away peacefully at home in Lyman, Maine on August 20, 2022,  surrounded by her loving family. Connie recently celebrated her 93rd birthday with family and friends.

Constance June March was born on June 11, 1929 in Rochester, New Hampshire, to working class parents Clifton March and Ida Junkins. The second of four children, Connie lived in East Rochester, NH until she graduated Spaulding High School in 1947.  Encouraged by her art teacher at Spaulding, Connie applied for a working scholarship to Kansas City Art Institute & School of Design in Kansas City, MO. She was accepted and she moved to Kansas City in 1947 to attend KCAI, graduating in 1951.

Connie returned to New Hampshire and in 1952 she married the love of her life, Robert Benjamin Canney of West Lebanon, Maine. Two sons, Michael and Brett, and a daughter Taryn were born between 1952 and 1955.

Connie lost her father suddenly one morning in 1955 when the car he and Connie’s mother were riding in to their job in a factory was hit by a train in Meriden, Connecticut. The railroad signal man had fallen asleep and failed to lower the gates at the RR crossing. Connie’s mother survived but spent months in a hospital recovering.

Connie and Bob lived in New Hampshire and Connecticut from 1952 to 1959, raising three young children and working at various jobs. They moved to Florida, where Bob enrolled in the University of Florida at Gainesville, and the family lived in student housing while Bob pursued his Master’s degree. Connie worked in the office of UF Student Publications from 1960-1964, which at the time produced the Florida Alligator newspaper. They became involved in the civil rights movement, and in 1963 Bob was among UF students who were arrested for a “sit in” protest at a segregated lunch counter in Ocala.

In 1964, Connie and Bob moved to Cocoa, Florida where Bob taught English Literature at Brevard Junior College and Connie taught classes in watercolor, oil painting and drawing for the Central Brevard Art Association in Cocoa and the Titusville Art League in Titusville. Connie’s works were exhibited by the Salty Dog Gallery in Cocoa Beach and the Shaggy Dog Gallery in Winter Park.

After Bob helped organize the first teachers’ union and supported a statewide teachers strike in 1968, he was terminated by BJC for union and anti-war activities. Connie and others went to jail for protesting the death of academic freedom at BJC. Connie and Bob then moved their family back to Gainesville where Bob worked on his Doctorate in Education and taught classes at UF. Connie and Bob continued to support civil rights and antiracist movements, and they were outspoken critics of the U.S. war against Vietnam.

In 1970, Bob helped to organize the first statewide antiwar protest, in St. Petersburg. In a pre-planned operation, police attacked the peaceful protest, and using a profanity charge as a pretext (Bob said in his speech, “Let’s bring the goddam war home and deal with the problems that confront us here.”) That charge was later dropped, but he was convicted of felony resisting arrest, sentenced to 2 years in prison and fired from his teaching job at UF. The case was appealed, but the Canneys were exiled to Maine, where their family worked to rebuild their lives.

Connie and Bob opened a shop they named “Someplace Else” in Alfred, Maine, selling antiques, art and books. But in 1975, when they returned to Florida for a hearing before the same judge and prosecutor, Bob was taken into custody and sent to prison. Connie organized a “Free Bob Canney” campaign with her sons and supporters, while her daughter kept the shop open to pay the bills. The state released Bob after a few months and they were able to return home to Maine.

Connie and Bob continued to operate their shop, and Connie sketched and painted with local artist groups. They remained active in social justice causes and traveled to Nicaragua and Cuba in the 1980s, before Bob passed suddenly in 1988. After losing her husband, Connie made sojourns to Mexico, Guatemala, Cuba, Honduras and Venezuela, always expressing her solidarity with people in resistance to empire.

After living in Florida for a few years, where she shared a house with her son Michael and her long time friend Carol Thomas, Connie returned to Maine to live with her daughter Taryn in 2014.

Connie Canney was an incredibly talented artist and an exceptional human being. She was fiercely dedicated to peace, human rights and social justice causes, and she always had an optimistic outlook no matter the situation or the challenge.  She loved life, she loved people, and her lifelong friendships were treasured by her. Connie was always authentic, and her life and her spirit will continue to be an example of courage, compassion, commitment and integrity. She was one-of-a-kind, and will be sorely missed by all who knew her.

Connie is survived by her sisters Marian Cornish of Florida, Jo Parrott of Washington, her children Michael, Brett and Taryn, all residents of Maine; grandchildren Justin Canney, Emily Coyne, Mary Jane Bird and Ashleigh Fife of Maine, Sara Bachelder of Florida, and seven great-grandchildren. Connie was preceded in death by her husband Robert, her brother Clifton (“Sonny”) March, and her granddaughter Linsey Winslow.

A memorial celebration and exhibit of Connie’s art will be held in September, location and date TBA. For info 207.206.9237. In lieu of flowers, her family suggests donations to Caring Unlimited (York County’s Domestic Violence Resource Center), Veterans for Peace Maine Chapter, or your local food pantry.

Condolences and tributes may be sent to the family at ConnieCanneyMemorial@proton.me

Share Your Memory of
Constance
Upload Your Memory View All Memories
Be the first to upload a memory!
Share A Memory
Plant a Tree