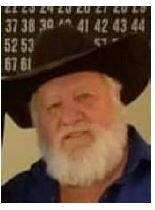 Please share a memory of Calvin to include in a keepsake book for family and friends.
View Tribute Book
Calvin L. “Cracker” Hartzell, 72 of Rockland, passed away at his home on May 21, 2022. He was born on May 5, 1950 (05/05/50) in Bath, Me. A son of Samuel and Frances Hartzell, he attended Freeport schools. In 1975, he moved to N. Carolina, and in 1982 settled in Decatur County, Tennessee, where he owned a bar. He also drove trucks cross country. After a divorce, he returned to Maine, where he met the love of his life, Rosemarie Eaton. The two were married and remained together until her passing in January of 2022. They were a very happy and loving couple who were socially active, being members of the American Legion Post 43, the VFW post 3108 both in Belfast, and the American Legion Post 1 in Rockland. Cracker had a love for “tall blondes” and karaoke. He and Rose owned and operated Hillbilly Karaoke. He is survived by his children, Calvin Hartzell Jr., Daniel Dubovy, Samuel Hartzell, and Angela Mikesell. Stepchildren Tammy Oakes, Karen Eaton, and Michael Eaton. Siblings Ruth Fillmore of Freeport, Louise Skillings of Belfast, and Charles Radley Sr of Brunswick, as well as several grandchildren, and great grandchildren. Calvin’s last message to all is, “I was here, now I’m gone.” A celebration of life will be held on July 2, 2022, 12 pm, at the American Legion Post 1, 335 Limerock St. Rockland, ME. Memories and condolences maybe be shared on his tribute wall.

Share Your Memory of
Calvin
Upload Your Memory View All Memories
Be the first to upload a memory!
Share A Memory
Plant a Tree