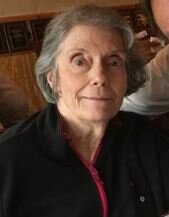 Obituary of JoAnn B. Smith

Please share a memory of JoAnn to include in a keepsake book for family and friends.
View Tribute Book
JoAnn B. Smith passed away peacefully, surrounded by and in the arms of family, on May 12, 2022. She was born in Coral Gables, Florida on June 8, 1936, the daughter of George Howe and Mary Lou Baldwin. JoAnn grew up in West Palm Beach, Florida and graduated from Palm Beach High School in 1955, where she made many friends and had fond memories that she recalled throughout the years. JoAnn attended college at Florida State University, then went to work at Pratt and Whitney Aircraft in West Palm Beach, Florida for a period of time. After this she married, and became a homemaker and devoted mother, living in Huntsville, Alabama; Seattle, Washington; New Orleans, Louisiana; Smyrna/Marietta Georgia; then returning to North Palm Beach Florida in 1968. She lived in greater Palm Beach County from 1968 to 2008, working for many years as a billing specialist in a large medical practice before retiring. In 2008, she came to live with her son, David, and his family in North Yarmouth, Maine. She lived her final years in the loving care of the staff at Saint Joseph's Residence in Portland, Maine. JoAnn lived a life of constant giving, love and concern for others, amazing those who knew her with her ability to overcome the significant challenges life threw at her, all with a smile and a focus on those around her. She truly saw beauty in this world and one can only imagine how at home she is in the beauty of the next. She went to be in the arms of our Lord and to join the many she loved so completely who had preceded her in death. JoAnn is survived by a son David F. Smith and daughter-in-law Mary A. Heath, of North Yarmouth, Maine, grandchildren Emily A. Smith and Alexander D. Smith, a nephew George Walter "Wally" Baldwin, Jr., Esq., a niece Amy Baldwin Osteen, her husband Scott Osteen, and second-nephew and second-niece Parker Scott Osteen and Lindsey Caroline Osteen. She was also very close to Mary Heath's children, Alan "A.J." Buzzell and Dawn Sky Grant, as well as Mary's many brothers and sisters, and their families, who treated her as their own. The family is planning a celebration of her life around the time of her birthday in early June, and then, in the coming years, her ashes will be laid to final rest in a grave next to the future resting place of her son David and his wife Mary. In lieu of flowers, donations can be made to Smile Train or Parkinson's Foundation.