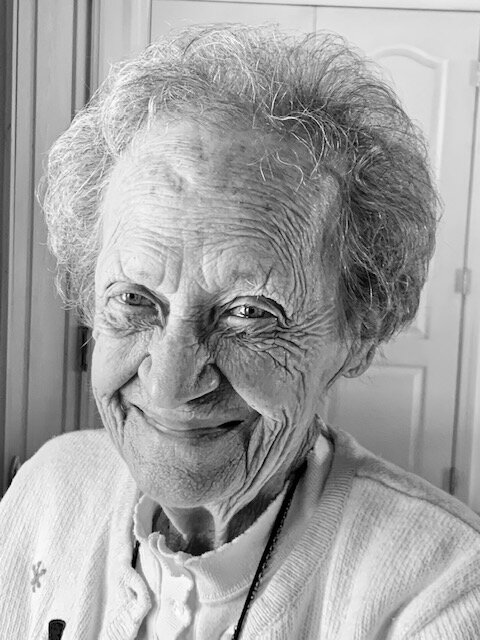 Please share a memory of Bernadette to include in a keepsake book for family and friends.
View Tribute Book
Bernadette (Champine) Massey passed away peacefully on February 12, 2022, at Mount St. Joseph Nursing Home in Waterville, Maine. At the age of 95 years old, she was ready and waiting to meet her lord and savior, with prayer beads in hand. She was born and raised in Fairfield Maine, the daughter of Archie and Marie Champine. She graduated from Lawrence High School and then attended a 1-year bookkeeping program at Thomas College. She worked in this profession at the Lockwood Dutchess until 1949, at which time she married her husband John “Steve” Massey. Bernadette became a housewife and mother, as well as part-time booker supporting her husband’s business ventures, including the Silver Dollar and Steve’s Restaurant. She was a devout Catholic, and her faith became her lifelong support. Her family members were always in her prayers, and her grandchildren always appreciated the fact that whatever their endeavors, Grammy’s prayers were with them. She will also be remembered for her dry wit and sense of humor, her love of dogs, and her strong will and independent spirit. Bernadette is lovingly remembered by her son Scott Massey and wife Brigitte, grandsons John Massey (Katie Woodworth) and Matthew Walters, granddaughters Katy DeBlois (Nick), Lauren McCabe (John), Aimee Massey and Christina Massey; great grandchildren Oliver, Madeleine, Jack and Daxton; sister Anita Mathieu, and several nieces and nephews. In addition to her parents, she is preceded in death by husband John “Steve” Massey, son Stephen Massey, daughter Sandra Walters, twin sister Jeanette Duguay, sister Estelle Maillet and brother Carl Champine. The family would like to thank the nursing staff at Mount St. Joseph, and Maine General Homecare and Hospice for their kindness and care these last few months. There will be no visiting hours, a funeral mass will take place at 9 AM on Saturday, March 5, 2022, at Notre Dame Catholic Church.

Share Your Memory of
Bernadette
Upload Your Memory View All Memories
Be the first to upload a memory!
Share A Memory
Plant a Tree