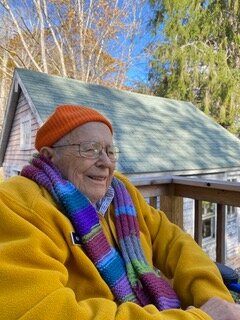 Please share a memory of Charles to include in a keepsake book for family and friends.
View Tribute Book
CHARLES ROBERT RUFFING August 1928 - February 2022 Charles Robert (Bob) Ruffing passed away peacefully at his daughter’s home in Damariscotta, Maine on February 2, 2022. He was 93 years old when he passed, after a long life spent as a brilliant inventor, an intrepid explorer of the outdoors, a committed utterer of non sequiturs, and the beloved patriarch of a large and deeply connected family. Bob was born in 1928 in Pittsburgh, Pennsylvania, as the only child of Frank and Garnette Ruffing. From childhood, Bob possessed an adventurous spirit and a love for the outdoors. He was a mountaineer, spelunker, rock-climber, skier, backpacker, and often more than one of these on a single trip. He was an Eagle Scout, an early member of the Pittsburgh Grotto of the National Speleological Society, an avid mountaineer with the Colorado Mountain Club, and a founding member of the Pittsburgh Climbers. He mentored countless young climbers and spelunkers, and he loved participating in big group outings. When he discovered a new limestone cavern in Westmoreland County, Pennsylvania, he used his naming rights to dub it Con Cave, a pun that gave him decades of pleasure. As a young man, Bob built a cabin in the Laurel Mountains that set the stage for many years of adventures with his friends and future family. In his twenties, Bob met the love of his life, Eloise Triggs. They married in 1958 and had four children: Jenny, MaryEllen, Linda, and Frank. Raising his family alongside Eloise was one of the great pleasures of Bob’s life, and he cherished leading the family on big cross-country road trips, spending weekends at the cabins and in the backwoods of West Virginia, and teaching his children to be adventurous and to be stewards of the natural world. Bob served in the United States Army Reserve during the Korean War, and he loved talking about the friends he made and the adventures he had during this time. He held degrees in Chemical Engineering and Energy Resources from the University of Pittsburgh. Bob worked for Westinghouse Electric Corporation as a materials engineer. He was an accomplished chemist and inventor, and during his 30 years at the company he was awarded 21 patents. When Westinghouse closed its East Pittsburgh works in the mid-80s, Bob and Eloise moved from Edgewood to Ligonier, Pennsylvania. Bob worked for years as an arbitrator with the American Arbitration Association and he was quite proud of his service on the Advisory Committee on Federal Assistance for Alternative Fuels Demonstration Facilities, to which he was appointed by President Ronald Reagan. Bob was the kiln master for Soggy Bottom Pottery and is legendary for his indestructible ceramics. Bob was also active in the Ligonier community teaching pottery classes at the Bethlen Retirement Home, leading yoga classes at his beloved YMCA, volunteering at Linn Run State Park and Powdermill Nature Preserve, serving on the cross-country ski patrol at Laurel Mountain, and bicycling and skiing well into his eighties. In his decades of retirement, Bob maintained his adventurous spirit and loved traveling to visit his family. He treasured the time he spent prospecting for gold in Nevada with his son-in-law Ed Flood; taking his heathen California grandsons to midnight mass at Christmas; and joining his children and grandchildren on annual trips to a remote island in Penobscot Bay, Maine that had neither running water nor electricity. He liked nothing more than sleeping on a cot and rising at six to make coffee in a percolator. In 2014, Bob moved to Damariscotta, Maine to live with his daughter Jenny Begin, her husband David, and their children Noah and Sarah Esmee. He was especially grateful for Jenny’s delicious breakfasts. In addition to Jenny, Bob is survived by his other three children: MaryEllen Ruffing of Santa Fe, New Mexico, Linda Ruffing of Fort Bragg, California, and Frank Ruffing of Arlington, Virginia and New Harbor, Maine. He also leaves thirteen grandchildren (each of whom he at some point called “hey you with the ears”) and six great-grandchildren. He was predeceased by his wife, Eloise. Bob continued to learn and evolve until the very end of his time on this planet. Bob’s friendliness, love and respect for nature along with his passion for telling stories, dry sense of humor, and wry wit will be remembered for many years to come by his friends and family.

Share Your Memory of
Charles
Upload Your Memory View All Memories
Be the first to upload a memory!
Share A Memory
Plant a Tree