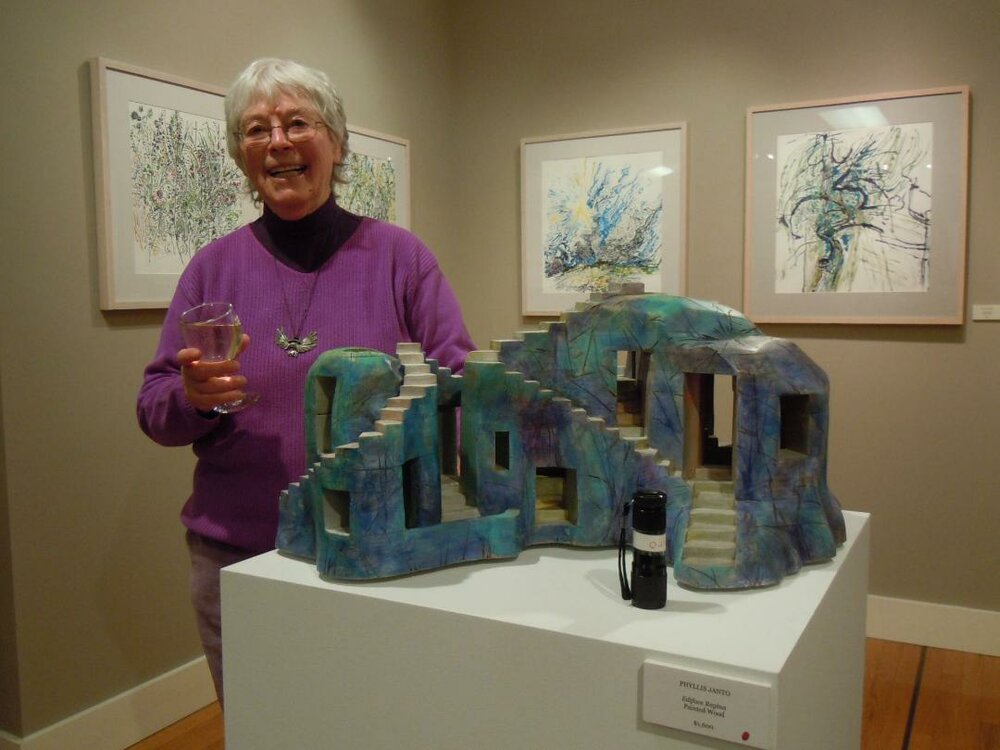 Please share a memory of Phyllis to include in a keepsake book for family and friends.
View Tribute Book
Phyllis Janto passed away on January 31st 2022, at the age of 89. She was born in 1932 to Russian immigrant parents, and grew up in Philadelphia, PA, only 90 miles from New York City, a magnet of excitement in the arts. In 1954, with an art school friend from the Moore Institute of Art, she moved into the City to work in design. That year, Phyllis met Martin Janto, a painter, and in 1955 the couple moved into a loft building which was full of active artists. They divided part of their space into studios and there Phyllis began her career as a wood sculptor. During this time, she got a B.F.A. from Hunter College and then, with a Graduate Fellowship, an M.F.A. in Sculpture from Pratt Institute. In 1965, with daughter Hrana added to the family, the couple followed NYC artist friends to Maine and bought a summer home in Washington, ME. In the summer of 1966, son Paul was born, new studios were built, and the house was renovated. In 2000, after thirty-five years of loft renting in New York, their building was sold, and the family moved permanently to Maine. Phyllis had a lifelong and varied active career in the arts. She taught Adult Art Education in New York City and Long Island University in Queens. She had over 13 one-person exhibitions of her sculptures and works on paper. She participated in a number of temporary outdoor sculpture installations between 1981 and 1987 in New York and Maine. In 1980 she received a Planning Grant from the National Endowment for the Arts to construct a sculptural ‘play and learn area’ for children on Roosevelt Island, but unfortunately this space became unavailable. Phyllis’ work is included in Syliva Sleigh’s women’s art bequest to Rowan University, Glassboro, NJ. She also showed in the Chicago Expo through Nina Owen Ltd, and a large SCULPTURE exhibit, juried by Grace Glueck in the Port of History Museum at Penn’s Landing in Philadelphia. After moving to Maine, she exhibited in a number of Mid-Coast Maine galleries, and was a founding member of the Downtown Gallery in Washington, ME. A few pieces of her work can be seen on Jonathan Frost Gallery’s website, Rockland ME. Her work is included in the ‘Dictionary of American Sculptors’, Glenn Opitz, Ed and ‘Step-by-Step Woodcraft’, Western Publishing Co.

Share Your Memory of
Phyllis
Upload Your Memory View All Memories
Be the first to upload a memory!
Share A Memory
Plant a Tree