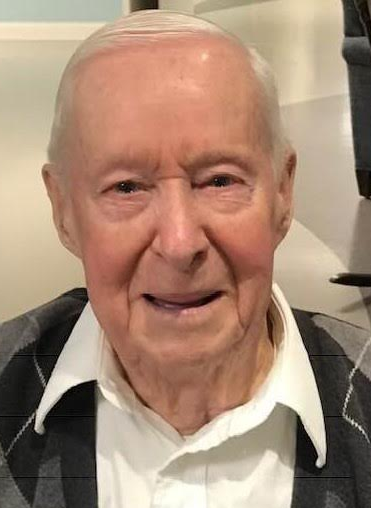 Please share a memory of Curtis to include in a keepsake book for family and friends.
View Tribute Book
AUGUSTA CURTIS WINSLOW WEST passed away at the age of 99 peacefully in his sleep at the Maine Veterans Home in Augusta on October 11, 2021. Curt, as he liked to be called, was born in Steuben, Maine on July 1, 1922. He was one of 12 children born to Gladys A. (Beal) and Thaddeus L. West. Growing up in the 1920s and 30s there was plenty of work to do on the homestead as well as lobstering. Curt has recalled many memories helping "Papa" (his dad) build and take care of the lobster traps. In 1939 Curt enlisted in the Maine National Guard and later joined the U.S. Army with the 43rd Infantry Division Artillery. He fought in the Northern Solomon Islands, New Guinea and Luzon in the Philippine Islands. Curt was the only one in his unit who knew how to run the Commanding General's 42' high-speed boat while they were in New Guinea and Luzon. The General's name for Curt was "herrin' choker", and the General often declared, "Herrin' choker is the only one I trust to operate my boat properly." Curt saved many lives in rescue missions amidst rough seas. He was awarded the following medals: the Bronze Star, Good Conduct World War II Victory Medal, American Defense Service Medal, Philippine Liberation Medal with one bronze star, Asiatic-Pacific Theater Medal with three bronze stars and one Bronze Service Arrowhead and the American Campaign Medal for Service. In 2018, Curt received the Maine Silver Star Honorable Service Medal and Certificate for his service during WWII. Curt was also presented with a challenge coin by the Maine National Guard. Curt met his future wife, Dolly (Dorothy) Foster from Brookline, Massachusetts while he was studying at Northeast University on the G.I. Bill. Curt and Dolly were married on November 14, 1947 and soon after, they moved to the Boothbay region where their son, John, was born and several years later daughter, Debbie. Curt lobstered when he first came to Boothbay Harbor and also worked with Albert Herald before joining Central Maine Power Company in the Boothbay Harbor office. He retired in 1984 from Central Maine Power after 35 years so he could care for his wife, Dolly, who had cancer. Dolly passed away in March of 1986. Curt was active in many organizations in the community and held many positions in those groups: The Boothbay Harbor Methodist Church, the Knights of Pythias, Masons, Eastern Star, Boothbay Harbor Rotary Club, the Fish and Game Club, Seaside Riders Snowmobile Club and American Legion to name a few. Curt also started his own business of small engine repair that he retired from in 2016 after he had rotator cuff surgery. He was also well-known on the Peninsula for making pies and popovers. Curt, along with Sherwood Leighton, ran the bean-hole bean suppers at the Methodist Church for well over 30 years. They were gifted two old cast-iron pits by the Reverend Fowle who also shared the secret recipe with them. One of the cast-iron pots now resides at the Hendricks Hill Museum in Southport. It was presented to the Museum docents, Jean Thomson and Evelyn Sherman in May 2019. Curt also enjoyed his weekly golf outings with "the boys". Every Thursday this group of friends met to go golfing during the spring and summer, then during the fall and winter they still met to go to breakfast. Even though during the winter months there may only have been two of them, they still went for breakfast. This tradition continued until the Covid-19 pandemic struck in 2020. Curt is predeceased by his wife, Dorothy "Dolly" Ann Foster in 1986. He is survived by his son, John L. West and wife Diane (Barter) of Wiscassett, Maine, his daughter Debbie Ann Prouty and husband Tom of Jefferson, Maine, granddaughter Sarah Edith Prouty Foster and her husband Jake of Turner, Maine and his pride and joy, great-grandson Corbin Winslow Foster; also his two sisters, Priscilla Kennedy of Steuben, Maine and Margaret "Peg" Grant of Southwest Harbor, Maine, along with several nieces and nephews. A memorial service will be held on July 1, 2022, time and place will be announced at a later date. In lieu of flowers, donations may be made to the Boothbay Harbor First United Methodist Church, PO Box 641, Boothbay Harbor, ME 04538. Memories and condolences may be shared at www.directcremationofmaine.com. Attachments area

Share Your Memory of
Curtis
Upload Your Memory View All Memories
Be the first to upload a memory!
Share A Memory
Plant a Tree