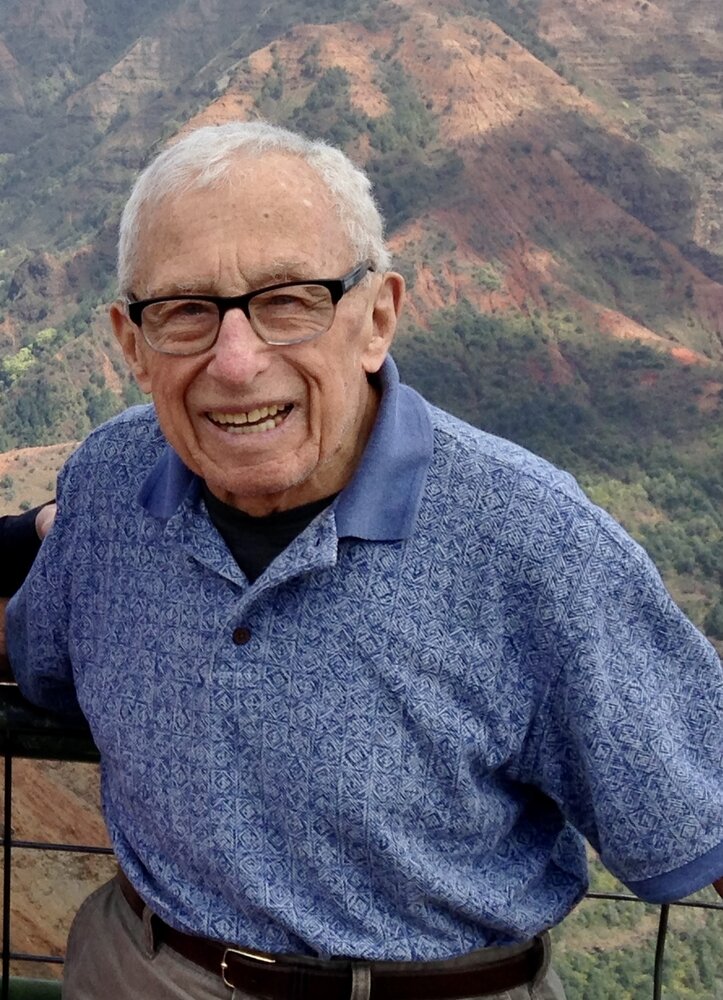 Please share a memory of Alfred to include in a keepsake book for family and friends.
View Tribute Book
Alfred Lee Margolis, retired judge, Los Angeles County Superior Court, passed away on September 22, 2021 in Camden, Maine. Al’s life began on April 4, 1928 in Dayton, Ohio where he grew up with his parents, David and Annabelle Margolis, and his sister, Joni. Al’s family operated a department store in Dayton and his neighborhood was populated with cousins, aunts, uncles and grandparents. Young Al enjoyed boxing and he developed a lifelong love of swimming and horseback riding. Al would recount that the part of his life that mattered most began at 17 when he met Margery Levy on a summer afternoon during a family visit at Camp Wenonah in Naples, Maine. During the subsequent four years of courtship, Al graduated from Culver Military Academy and started college at Stanford University. Al was fond of telling the story, “..stop me if you’ve heard this..,” of how Stanford had mistakenly admitted him, requiring him to take his SAT exams midway through his freshman year. Al and Margie married in her hometown of Cleveland in 1949, and then returned to California where Al would finish college and then start law school. Like so many of his generation, Al’s studies were interrupted while he served in the Korean Conflict. As Quartermaster Bakery Officer for the US Army, his Jeep was easily identifiable by a loaf of bread painted on one side and an ice cream cone on the other! Upon completing his tour of duty, Al and Margie returned to Cleveland where Al continued his law studies at Case Western Reserve. Al served on the Law Review and graduated as a member of the Order of the Coif, a national honor society for law school graduates. Al’s career in law began with the U.S. Treasury in Washington D.C. and continued in Los Angeles where he would eventually start his private law practice. As a notable tax lawyer (Al was one of the authors of the CEB tax practice treatise sitting on the bookshelves of many tax specialists), Al’s talents were recognized by Governor Ronald Reagan with an appointment to the L.A. Municipal Court. A few years later, Gov. Reagan elevated Al to the L.A. County Superior Court where he served until his retirement. Al was honored as “Trial Judge of the Year” by the L. A. Trial Lawyers Association. He also served as president of the Los Angeles Law Library, a role which gave him great joy. Al took great delight in mentoring several young lawyers and was honored to swear them in after they passed the bar exam. The many weddings performed by Al—including one on horseback—gave him the chance to forge even stronger personal ties with those friends, and friends’ children, in whose futures Al was personally invested. Los Angeles in the 1960s and ‘70s was also where Al and Margie raised their three children, Ellen, Michael and Jane. Family auto trips in the station wagon were a summer staple, often focussing on California’s rich cultural history and vast natural beauty. Al and Margie loved adventure and never passed up a chance to travel with their children. Even though he never owned a horse, Al’s early love of horseback riding continued throughout his life. He was a founding member of the trail riding group, Cowboy Lawyers, and a member of the Wickenburg, Arizona-based Desert Caballeros for over 40 years. These rides blended camaraderie with beautiful natural surroundings, trail riding with sleeping under the stars. Al and Margie shared their love of horse adventures with their children, and later their grandchildren, on horse pack trips in the Colorado Rockies. Al and Margie traveled extensively together, beginning with a youth tour of Europe months before they married. Over the years, they travelled throughout much of the U.S. They visited every continent and many remote regions of the world. They made many lifelong friends on their adventures, and often hosted international guests when home. In 2003, Al and Margie bought a house on beautiful Seven Tree Pond in Union, Maine. What was supposed to be a summer place, quickly took over as their year-round home as they fell in love with their new community and with the natural beauty of their surroundings. Maine had always occupied a special place in their hearts, so this was very much a homecoming. Al immersed himself in community life, volunteering on advisory boards for the Pen Bay YMCA in Camden and the Vose Library in Union. Al remained interested in current events and the law until his death. He read the newspapers daily and engaged in lively discussions on social and political issues. He had a remarkably keen memory and immense curiosity. In his last days, he voiced the hope that he was leaving the world a better place than when he entered it. For those who knew him, that was certainly true. He was a man of small stature, but had a huge heart, He was generous with his love and will be greatly missed. Al is survived by his wife of 72 years, Margery Levy Margolis; three children, Ellen Rosenberg and husband Robert, Michael Margolis and wife Mary Bourke, and Jane Pierce and husband David; nine grandchildren, Michael Rosenberg, Ari Rosenberg, Sarah Rosenberg, Sam Brosnan, Molly Brosnan, Rick Pierce, Mitchell Pierce, Bridgett McCarthy, and Alison Wheat; and six great-grandchildren, Corin, Joey and Mara Brosnan, Fiona McCarthy, Denham Wheat and Tzeda Accordino.

Share Your Memory of
Alfred
Upload Your Memory View All Memories
Be the first to upload a memory!
Share A Memory
Plant a Tree