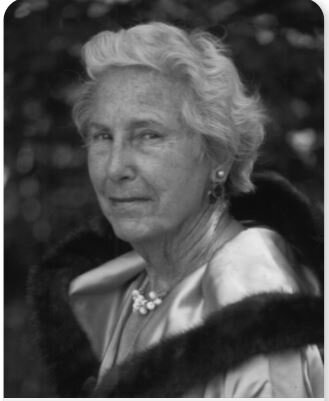 Please share a memory of Sonia to include in a keepsake book for family and friends.
View Tribute Book
CAMDEN — Sonia Allen Spalding, 96, passed away under the harvest moon Tuesday, Sept. 21, 2021, at her home in Camden. Sonia was born in New York City May 31, 1925. She was the daughter of Curtis and Dorothy Allen of Philadelphia. She grew up in Chestnut Hill, Penn., graduated from Westover School in Connecticut, and studied at the University of Pennsylvania. In October 1950, she attended a friend’s wedding in Camden, where she met Irwin “Bud” Spalding of Honolulu, Hawai’i. A year later, they were married in the same church where they met, beginning almost 70 years of marriage. For 40 years, Sonia and Bud lived in Wayland, Mass., and raised five children while Bud worked as a marketing executive in Cambridge and Worcester. Since her early youth, Sonia’s summers were spent with her family at Gray Lodge, their cottage on Dillingham Point, where she enjoyed all that the Midcoast had to offer. As a teenager, she worked as part of the Youth Conservation Corp and revitalized a number of trails in the Camden Hills, including the Sky Blue Trail, one of her favorites. In the 1940s, the Camden Herald published a periodic column of her musings on the beauty of the Camden Hills, descriptions of various hikes, and the benefits of bicycling during wartime. From her childhood into her 90’s, Sonia always had a beloved Doberman to accompany her on her adventures. When it came time for Bud to retire, it was only natural they chose Camden as their permanent residence. They stayed active year-round: hiking, bicycling, mountain climbing, mushrooming, sailing, beach combing, skiing and sledding. She was an avid golf and tennis player into her 80s, and Sonia and Bud were a formidable doubles pair. Sonia enjoyed being on the water in a sailboat or motorboat, and had many funny stories about adventures on both. She knew all the windjammers by sight and found pleasure in watching them come and go from Camden Harbor. She continued as a trailblazer throughout her life as a passionate advocate for environmental causes, especially land and wildlife stewardship. In Camden, Sonia and Bud were very active in land conservation as dedicated volunteers with Coastal Mountains Land Trust. Sonia worked on the campaign to restore Beech Nut, the hut on Beech Hill and helped organize volunteers for the annual blueberry picks and the docent program. She and Bud enjoyed international adventures including trekking in New Zealand, sailing in Tonga, beloved trips to Bermuda and visits to their children, grandchildren and close friends. They also adored the splendid isolation of St. Helena, the Maine island they loved so much. A lifelong learner, Sonia took courses through Harvard Alumni College in astronomy and other sciences. She enjoyed classes at Belfast Senior College and attended the Camden Conference and many events at the Camden Public Library. Sonia and Bud made many friends in the Camden area who joined them on their adventures, as well as on the porch at Gray Lodge to enjoy the view of the harbor, islands and Penobscot Bay. On some cold winter days, hardy friends would join her and Bud as they careened down the snowy Mt. Battie road on their Flexible Flyer sleds. Sonia was predeceased by Bud May 20, 2021. She is survived by son Curtis Spalding and wife Jody, of Everett, Wash.; daughter Anne Spalding of Carona, Switzerland; son Andrew Spalding and partner Casey Misuraca of Forest Knolls, Calif.; daughter Barbara Spalding of Camden; daughter Amy Spalding-Fecher and husband, Randall, of Pelham, Mass.; six grandchildren Kaila Nicoli Cattani, Manuel Nicoli, Leilani Nicoli Ajetaj, Lucy Spalding, Maya Spalding-Fecher and Grace Spalding-Fecher; and five great-grandchildren. She was predeceased by her younger sister, Marya Allen, of Camden. The family would like to thank the team of caregivers whose dedication, loving care and humor made every day special and helped create a wonderful life for Sonia: Janet Hocking, Meredith Crute, Gail McComiskey, Kelly Reynolds and Josie Heyneker. You are exceptional. A celebration of lives well lived will be held for Sonia and Bud in Camden Oct. 9. In lieu of flowers, donations may be made in her memory to the Coastal Mountains Land Trust or Westover School. Memories may be shared at directcremationofmaine.com.

Share Your Memory of
Sonia
Upload Your Memory View All Memories
Be the first to upload a memory!
Share A Memory
Plant a Tree