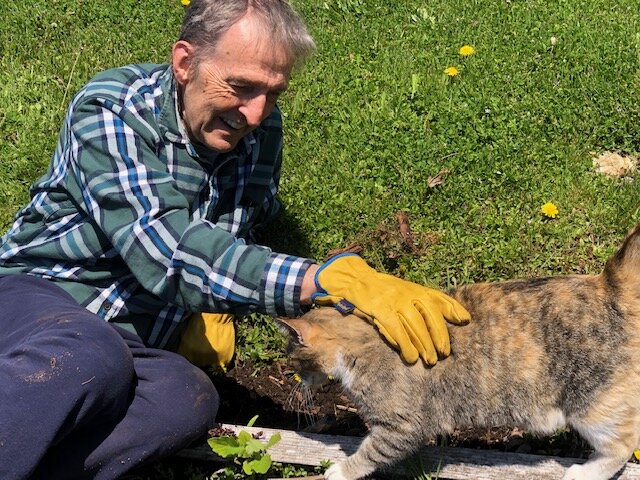 Please share a memory of John to include in a keepsake book for family and friends.
View Tribute Book
John Blydenburgh, 83, a long-time resident of Tenants Harbor, ME died August 17 at Gosnell Memorial Home Hospice in Scarborough. He recently resided at Bay Square in Yarmouth, and formerly lived in Massachusetts, New Jersey, New York and overseas. Born in Islip, New York, he played sports and performed in school plays throughout high school. The pinnacle of his high school athletic career was during a baseball game against rival team Bridgehampton School, when he struck out Carl Yazstrzemski. Although he was recruited by the Brooklyn Dodgers farm team, he didn’t try out, instead opting to join the US Air Force, serving for three years. The GI bill sponsored his study of political science at SUNY Binghamton; he earned his PhD at the University of Rochester. His pioneering work with survey research led him to a teaching position at the Eagleton Institute of Politics at Rutgers University and to ABC News where he worked as a Polling Consultant from 1969 through the 2008 presidential election. In 1975, John joined the Government Department at Clark University in Worcester, MA where he taught classes in game theory and survey research. Living in Princeton, Massachusetts provided John with many opportunities to channel his creativity and ingenuity, from raising a small herd of goats and building a barn for them, to tapping maple trees and making maple syrup in a sheet metal pan over a fire in the driveway. He fixed up a cider press found at a flea market and searched junkyards for parts for his old Volvos with multicolored bumpers. His travels around the world included camping through Europe before graduate school with his wife Grace; a Fulbright Scholarship to Wellington University in New Zealand; a sabbatical to University of East Anglia in England with his family; a two week tour of Israel with his daughters; and a fellowship to Azerbaijan; as well as a road trip from Seattle to LA, camping with college friends and four children under the age of 10, and other travels to meet friends and family around the country. John was equally active in retirement in Maine. He worked in his ceramics studio (providing pots for the town Library plant sale several years ago), attended monthly lunches of the Midcoast Forum on Foreign Relations, and volunteered in local organizations. He became a Master Gardener, using his knowledge, skills, and interests to plant six to eight raised beds of vegetables every year, sharing the bounty with family, friends, and community. His annual Memorial Day brunch gathered neighbors and friends on his porch where we ate bagels and his homemade signature salmon pate and watched the St George parade pass by the house. He never passed up an opportunity to offer a sly joke or play on words, from bedtime stories he told which ended in a titular pun (“Piddle Mouse in the Dairy”) to explaining that the sign on the road was redundant because the Bear was always Right until he Left to telling longer stories like his Zen existentialist pig joke. In recent years, John’s health declined due to the Powassan virus. He died as a result of health issues -brain injury and Parkinsonian symptoms- brought on by this tick-borne disease. He is survived by his sister Louise, former wife Grace, daughters Jenn and Emma Kate, Emma’s stepsons Jeff and Alex and their children, nieces and nephews and friends. In lieu of flowers, donations in his name are welcome at Trekkers.org, and/or St. George Community Development (this oversees several funds- our favorites are the Community Cupboard and the St. George School Fund). No funeral services are planned at this time.