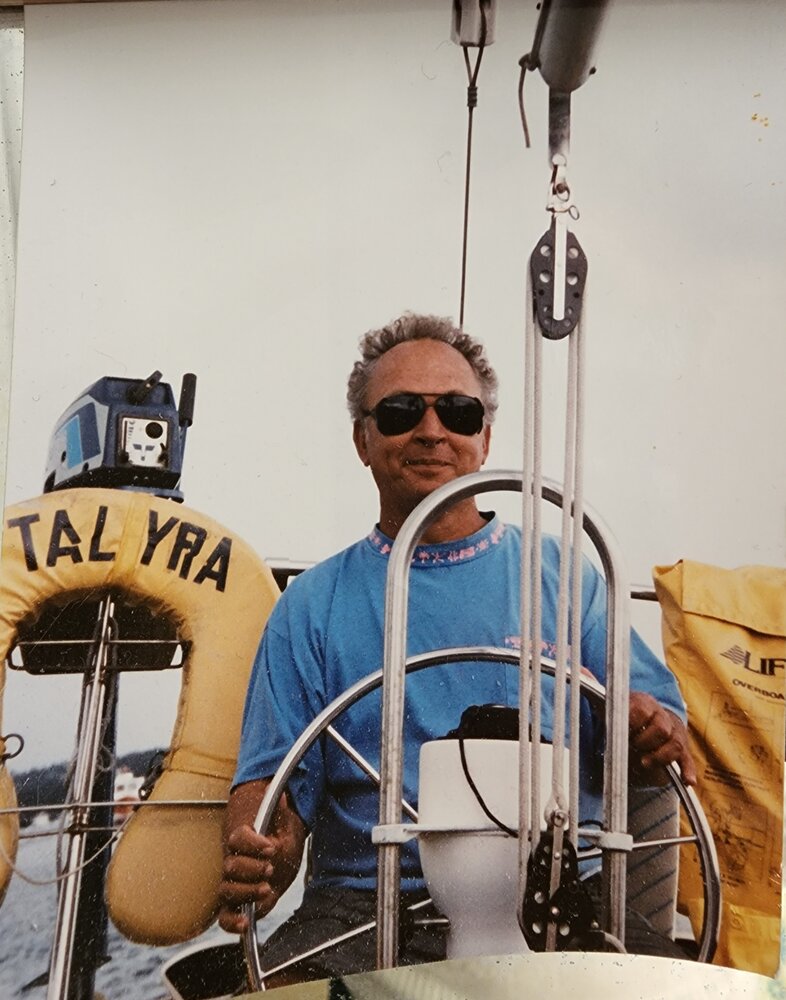 Please share a memory of George to include in a keepsake book for family and friends.
View Tribute Book
George A. Swazey III, age 79, passed away at home on the morning of March 23, 2022, with his wife of 42 years by his side. He was born in Milo, Maine, to George A. Swazey, Jr. and Frances Emmons Swazey on October 28, 1942. He was delivered by the town midwife, his grandmother, Bessie Swazey. His father was a bomber pilot in WWII and was killed in action over Yugoslavia on April 23, 1944. Consequently, George was particularly close with his grandparents. After his grandfather’s passing when George was 12, many older men in the community became his mentors. In particular Kirton Bell, Mac McDonald, Buddy Daggett, and his best friend, Ralph Monroe, taught him values and skills that played important roles throughout his life. At an early age, George could be found conducting science experiments in his “laboratory” in the attic. His endless curiosity and love of problem-solving continued into his adult life. He believed it was always important to have a project. He repurposed and automated an old sawdust burner to connect to the household baseboard heating system, set up hydroponic tanks for home grown tomatoes in the living room, and built a variable speed pottery wheel for his wife, just to name a few. After graduating from Milo High School, he tried his hand at many jobs. He attended dental tech school in Boston where he also worked part-time at the Sheraton Hotel as an elevator boy before being promoted to Food Services. He worked as a tractor-trailer driver, on heavy equipment construction crews and at the paper mill in Millinocket before ultimately deciding to go to work for the Canadian Pacific Railroad where he worked for 28 years. He retired as an engineer on the passenger trains. George grew up loving Maine and everything it had to offer. Whatever interested him, he pursued it. An outdoorsman, he loved fishing, hiking, camping, downhill skiing and even tried his hand at skydiving. He had a strong desire to learn to fly after the many stories his grandfather shared with him about his father. He fulfilled that dream at Folsom’s Flying Service in Greenville where he became a bush pilot under the tutelage of Charlie Cole. A self-taught musician, George played guitar, piano and clarinet by ear. His love of music and rhythm also translated onto the ballroom dance floor. Every summer for 18 years, the whole family enjoyed sailing its Bristol sloop, Talyra, along the coast of Maine. George’s seamanship saw the family through several harrowing situations. Many wonderful memories were made during those summers. George was a natural storyteller and always appreciated having new audiences to hear his stories of growing up, working and recreating. He was able to tell the stories in a way that kept his listeners engaged and wanting to hear more (except for those of us who had already heard them at least 50 times). The family wishes to give special thanks to Minda Gold, his doctor and friend. Thank you for always being there. In addition, thank you to his exceptional Beacon Hospice nurses Dakota, Danni, and Elisha. He is survived by his wife Shelly Swazey, stepdaughter Jennifer Blumberg and husband Eric, his two grandsons Cole and Chase, and his dog Darby. The family is planning a Celebration of Life late spring or early summer.

Share Your Memory of
George
Upload Your Memory View All Memories
Be the first to upload a memory!
Share A Memory
Plant a Tree