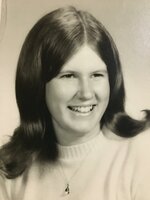 Karen Elaine Anderson, 67, of Waldoboro passed away peacefully at the Sussman House in Rockport, Maine on November 14, 2022, knowing faithfully she was going to be with her Savior.  Born in Rockland, Maine on December 16, 1954 to Kenneth Russell Anderson and Beverly Ann (Young) Anderson, she was the second of three siblings.

She and her family moved to Waldoboro in 1961 where she entered Miller School and then graduated from Medomak Valley High School in 1973.

During Karen’s youth she would spend summers on Matinicus Island with her grandparents, Maxwell and Cecelia Young.  Many trips to the island were onboard Max’s sardine carrier, the Catherine Beverly, named after her aunt and mother, respectively.  She could be found picking small field strawberries with “Grammie” for canning of preserves ,and doing chores.

Being a homebody, she liked to crochet, read, watch Shepherd’s Chapel on TV, and especially looked forward to watching the birds outside the yard through the seasons.  Karen enjoyed her country music, and all of the family get-to-togethers, and, of course, fresh local seafood.  She loved her dear companion dog, “Princess,” who kept her company for many years.

The door was open for friends needing a place to stay during times of hardship; Karen was known to help others, no questions asked.  She had a special way of being a heartfelt support in counseling others in their times of need. Karen was of the kind who could strike up a conversation with anyone.

A graveside service will be held in the Spring with Pastor Doug Wood officiating at the Shuman Cemetery in Waldoboro.  A private gathering of Karen’s family and friends will be held later this month.

Memories and condolences may be shared on her tribute wall.