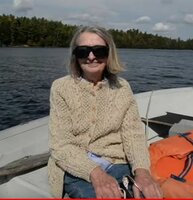 Linda Breslin died November 3, 2022. She was born on April 26,1942, in Steubenville, Ohio, to Helen Lang and Charles Barr. Her mother and father met while Charles was stationed in Brooklyn with the US Army. They moved shortly after to Ohio where Linda was born. Her sister Gail was born after that in Brooklyn. Charles and Helen were divorced and Helen moved back to New York. Helen remarried William O'Sullivan.

Linda graduated from New Dorp High School and went to Hunter College from which she graduated with a BA in Political Science. Linda subsequently obtained a Master's Degree from Fordham University. After working as a social worker for several years she left the field to study painting full-time at the Brooklyn Museum Art School and studied with Reuben Tam.

Linda was persuaded to return to Social Work and subsequently began a career in Mental Health administration. She served as an Associate Commissioner for the New York Department of Mental Health before moving to Maine to become Superintendent of Augusta Mental Health. James and Linda had vacationed for several years prior to this at their camp in Liberty, Maine. James and Linda had one son, JB, who died from a seizure at age 30. Linda left AMHI and became Director of Glenridge Nursing Home and eventually retired.

Mrs. Breslin also served as President of the Liberty Lakes Lake Association for 20 years from which she recently retired. She had a deep interest in ecology and lake preservation. Her hobbies were reading and working with stained glass. She loved dogs, especially her Standard Poodle, Annie.

Linda is survived by her husband James, her sister Gail Judson and her husband Roger, two nephews Jon and Chris, and a great-nephew, JJ.

She elected to be cremated with no funeral but a Memorial Service will be planned in the Spring.  Linda was featured in a segment called "This Maine Cabin".  To view, copy and paste link  - https://youtu.be/OEGsneS-ss8.

Instead of flowers, Linda would have wanted donations to be sent her memory to Goodwill Industries of New England https://goodwillnne.org/donate/