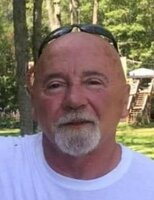 In the early hours of Saturday, April 30th, 2022, Daniel Albert McPhee passed away in the comfort of his home holding the hand of his wife (and best friend) Rebecca with his son, Jason, also by his side. Born on September 26th, 1952, he lived his 69 years full of adventures and motorcycle rides, laughter and an abundance of love. He was extremely hard working - professionally having retired from Bath Iron Works in 2019 after 43 years of service and he always had a project (or 10) at home on "the lake". Daniel went by many names: Dan, Danny, Dan-Dan, Dad, Papa, Grandpa Dan-Dan, and sometimes some silly names that need not be repeated here. No matter what you called him, you just knew that he had an incredible amount of love for you, you could hear it in the way he spoke and see it in the way he acted - especially with all the children that came into his life. To say he will be missed by all who knew him is an immense understatement. He was predeceased by his parents, George and Helen McPhee, and siblings Weldon Robbins, Ralph Robbins, Roy Robbins, Bill Robbins, George Robbins, and Francis Field. Daniel is survived and remembered by his wife of 43 years, Rebecca of Washington, ME, his son Jason Daniel McPhee and significant other Melissa Walden also of Washington, ME, as well as his bonus daughter Chelsea Evelyn Moccia-Schwartz (and family) of Angleton, TX; his grandchildren Jakob McPhee of Washington, Alexandria Hammond of Durum, ME, Louie and Evelyn Schwartz of Angleton, TX, and Garrett and Gavin Soiett of Warren; his great-grandchildren Royce and Edna St. Amand of Durum, ME. Additionally he is survived and remembered by his mother in-law Mildred Eaton of Cushing and many, many nieces, nephews, great nieces, great nephews, great-great nieces, and great-great nephews. Danny is survived and remembered in the hearts of numerous friends but especially his and Rebecca's special longtime friends Arthur and Leola Dean of Melbourne, FL. Per Daniel's wishes there will be no formal service.