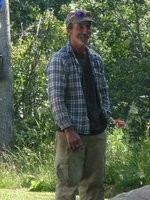 Thomaston- Mark R Johnson Sr, 60, died unexpectedly July, 8 2021 at Penobscot Bay Medical Center in Rockport. Born in Rockland on December, 4 1960, he was the son of Arthur Johnson Sr and Lorraine Jackson Johnson. He was educated in Union and Rockland schools. He worked several years at Hannaford as well as lobstering and more recently as a janitor for RSU 13. He met the love of his life Vicki L Gower in 1972 and together they had 2 children. Mark enjoyed spending time with his grandchildren, who were his pride and joy, he enjoyed family gatherings, being on the water, riding around the water, watching sports and the price is right. Mark was pre-deceased by his parents. He is survived by his girlfriend of 49 years Vicki Gower of Thomaston, his son Mark Johnson Jr of Thomaston, his daughter Jamie Masonoff and her partner John Joy of Camden. His grandson Tyler Masonoff of Thomaston, his granddaughters Macenzie Masonoff, Emilee Masonoff and Paityn Masonoff all of Camden. His brothers Arthur Johnson Jr, Bruce Johnson, Steven Johnson and Richard Johnson and his wife Stephanie all of Rockland. His sisters Brenda Perkins of Rockland, Cynthia Mudgett and her husband Chris of Spruce Head, Denise Poirier of Cushing, Pamela Harrington and her husband Leroy of Thomaston, Sharon Nickles and her husband Ron of Owls Head, Angela Vigue and her husband Tim of Washington, and Nancy Erney and her husband Ron of Bangor, PA, as well as several nieces, nephews and cousins. Friends and family are invited to attend his memorial service on Saturday August, 7 2021 at 1 pm at the Owls Head Community Building in Owls Head with a gathering and lunch to follow.