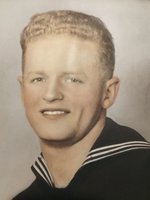 Life began on “The Farm” in Bradley, July 17, 1932, and concluded on April 27th, 2021, at the Maine Veteran's Home in Bangor at 88 years old. Robert, also known as Bob, Bobby, Dad, Papa and Papa Bob was the first-born son of Robert H and Bea (Mutch) Rowell, one of five children. While he saw the world serving eight years in the US Navy and the Naval Reserves, he was the happiest at home in Bradley. On September 14, 1956, Bob married Minnie Johnston and for 64 years they made a life together, having two daughters, Pamela and Rhonda and one son, his name's sake, Robert M. Rowell, Jr. Bob, a family man, was a lifelong resident of Bradley. He owned and lived in seven different homes all located in what was known as the “lower end". The most recent having been built on the original family homestead. Bobby lived to work and worked to live. He was self-employed most of his life having owned and operated several small businesses. Rowell’s Garage, Rt 178 Service, R & R Trucking, and his latest endeavor, All R’s, Inc. Partnered with his family-built Penney Lane Estates and High Point Place both in Bradley. During his earlier years Bob plowed the Town of Bradley roads and was involved with the resurrection of Leonard’s Mills. He loved of the woods and hunting became a lifelong hobby for which he happily shared with his son and grandson. Other enjoyments included swimming, diving, family vacations (both far and near), Spencer’ Ice Cream and his vegetable gardens (“flowers are a waste of time”) but his true passion was cutting, splitting, and stacking his own firewood. He will always be remembered for his “trademark” wild hair (protesting loudly when a cut was looming) and King Edward Cigars. Bob was predeceased by his parents, three sisters, Fern Rowell, Marylee Michaud and Donna Emerson; and his only brother Wayne (Jackie) Rowell; brother-in-law, Richard Allen; several nieces, a nephew and lifelong friends, Leroy Hutchings, Roland Rose, Arthur Curtis, Dean Harris, and David Brissett. Survivors are many: Wife, Minnie; daughters, Pam, and her husband Wayne (Amos) Robichaud; Rhonda and her husband Jack Warren; son, Robert Rowell Jr. Grandchildren; Dr. Jennifer Sprague and her husband Russ; Andrew Robichaud and his wife Devyn. Great grandchildren; Samantha Warren, Jacob Warren and the littlest one, Greyson Sprague; Two special “sisters” Marie Allen and Beth Hutchings; brother-in-law's Cal Johnston and his wife Linda; Richard Johnston and his wife, Glenda; extended family Scott and Linda Warren, Ed and Heidi Gosselin; as well as many nieces, nephews and friends. A special thank you to those who assisted in his care, sister-in-law Linda, Stacey of Visiting Angels, Mary of Momma Bears, Drs. Shulman, Singer and Biswas as well as the entire team at the Maine Veterans Home, Bangor. A celebration of Robert’s life will take place June 5th, 2-5pm at 182 High Point Place, Bradley. In lieu of flowers donations can be made to The Travis Mills Foundation (a retreat for wounded veterans and their families in Maine) 747 Western Ave Suite 1 Manchester, Maine 04351. 207-480-3490 travismillsfoundation.org e-mail: foundations@travismillsfoundation.org