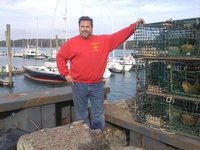 Chris Quartucci, age 57, passed away at Eastern Maine Medical Center in Bangor, Maine, on April 24 due to complications from Covid. Chris was born on January 14, 1964, and was a graduate of Jefferson Township High School in Oak Ridge, New Jersey. Although he grew up in New Jersey, he spent summers in Greenville, Maine, where he and his family own camps. Chris’ parents owned an Italian restaurant in Maine called the North Woods Inn and Chris inherited their talent and love for cooking. Besides impressing friends and family with his culinary skills, he also volunteered as a cook and bartender at the Moose Lodge in Newton, NJ, for nine years before acting upon his dream to live in Maine full time. Chris was employed at the Passaic County Courthouse in Paterson, NJ, from 1989-2007 where he started as a court clerk and then became the IT Tech for the courthouse. For many years he was a resident of Andover, NJ, and enjoyed volunteering his time with his sons, Mike and Nick. In addition to coaching youth soccer for his sons’ teams, he volunteered with The Boy Scouts. He was a Den leader for his son, Nick’s, Cub Scout Troop 181 as well as an active volunteer with The Boy Scouts in Troop 85 in Andover/Newton. He was a leader at campouts and summer camp and was also the co-founder of their major fundraising event, the 5k-10k Run at Camp Allamuchy. He also volunteered his time at pancake breakfast fundraisers. He was a great Boy Scout leader and was always there for all of the boys. Chris was the life of the party. He always had an entertaining story to tell. He was very outgoing and friendly to everyone, he had a big heart for animals and people. He loved his dogs, his family and his friends. His talents included bartending, cooking, taxidermy and fishing and he loved spending time with his two sons, Mike and Nick. He worked as the computer technical support person for Automated Wireless until the time of his death. In 2019, he realized his dream to live in Maine full time and made the move to Abbot with his girlfriend, Tish Ayres. He served on the SAD #4 School Board of Education as well as the Town Board in Abbot. Chris is survived by his two sons, Michael and Nicholas Quartucci, his sister Diane Baker as well as his brother in law, Kevin, his niece and nephew, Caroline and Daniel Baker. He is also survived by his ex-wife, Tracey Quartucci, with whom he remained friends, and his mother, Gloria Quartucci. He was predeceased by his father, Joseph Quartucci. He will also be greatly missed by his girlfriend Tish Ayres and her children Jay and Janel Ayres and Deanna Proulx. Chris’ laughter and love for life will be missed by many friends and family members. There will be a private family ceremony. Anyone wishing to make a donation in his name can do so by donating to mooseheadoutdooralliance.org.