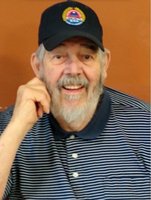 Earle M. Rowe August 26, 1932 – Feb 22, 2021 Yarmouth- Earle passed away at Bay Square after a lengthy illness. He was born in Freeport, ME on August 26, 1932 the son of Grace (Williams) Rowe and Horace Philbrick Rowe. He attended Freeport High School. He served during the Korean Conflict, spent 4 years in the Air Force and 3 years in the Navy. Earle was a lifetime member of the American Legion, Amvets, and VFW. He retired from the Freeport Post Office. Earle also coached little league baseball for many years. He enjoyed fishing, hunting, and golf. Survivors include his daughter Lynne Romasco and husband, John of Freeport. His son Guy Rowe of Manchester, ME, and a son Earle Rowe Jr. of Freeport. He is also survived by a granddaughter Antonia “Toni” Romasco of Freeport and grandson Tyler Rowe of Winthrop. Two nephews, Kenneth Rowe of Tega Cay, SC and William Rowe of Freeport, ME. A private memorial service will be held at a later date. Thank you to all the people of Bay Square and Compassus Hospice for all they did for our dad to keep him safe, happy and loved.