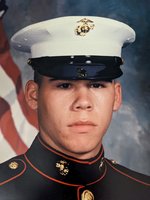 Marine Sergeant Anthony Richard (Giggey) Dion, 47, of Caribou, ME, passed away December 11th, 2020, at Togus Veteran’s Hospital in Augusta after a long illness. Anthony was born on September 7th, 1973, at Caribou Hospital to Inza (Forbes) Sharp and Richard Dion. He attended Presque Isle High School, and after graduation Anthony enlisted in the United States Marine Corps where he served his country for six years from 2002 to 2008. Anthony enjoyed fishing, hunting and outdoor activities. He had a great love for animals, especially dogs. He is survived by his father, Richard Dion of California; mother, Inza (Forbes) Sharp of Castle Hill, ME, sisters and their spouses, Trina Cote and Anthony of West Paris, ME; Krista Kennedy and John of Castle Hill, ME; sister Annamae Dion of California; brother Wallace Giggey and girlfriend Georgette Marston of Rockland, ME; brother Richard Dion Jr. of California; daughter Jazmine Wilkins of Caribou, ME; ex-spouse, Lena Giggey of Caribou, ME; many nieces and nephews, and great-nieces and great-nephews; uncle Jack Dion of Massachusetts, and many aunts, uncles and cousins. Anthony was predeceased by his stepfather Terrance Sharp; both maternal and paternal grandparents; a brother Travis J. Sharp; and a nephew Tyson Sharp. Graveside services will be held at the Castle Hill Cemetery with a date to be announced in spring.